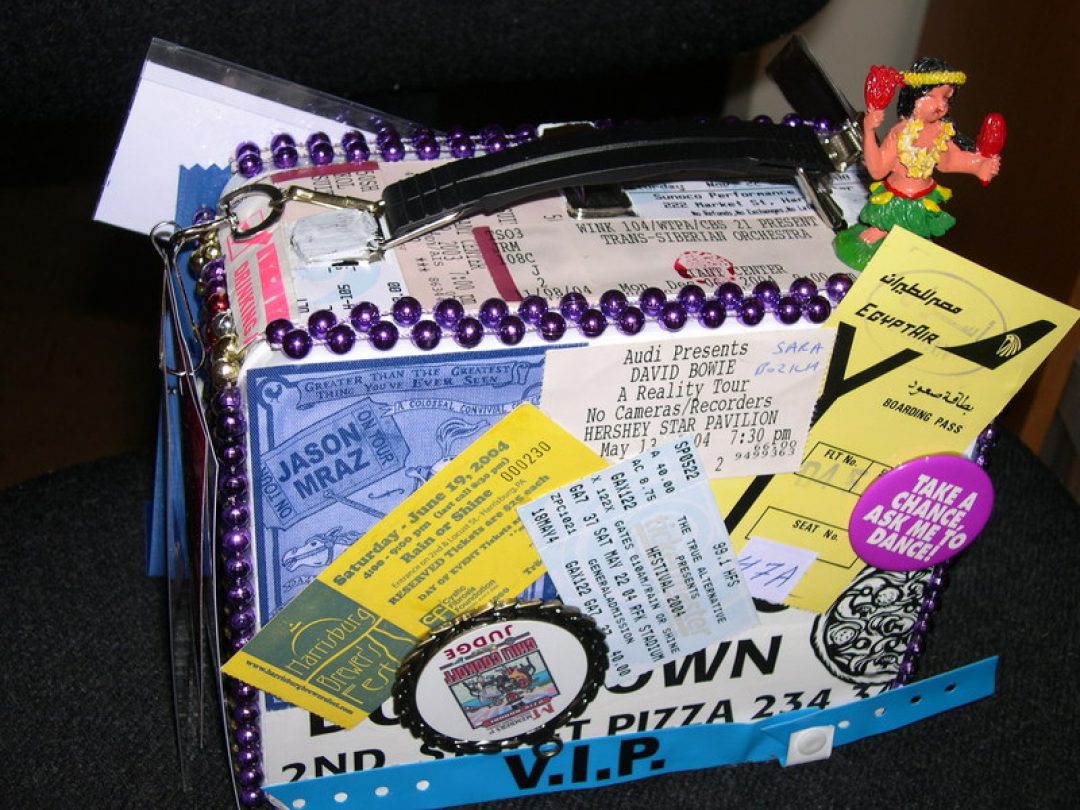 Like the once-prevalent cows, you will soon see local artists’ work spring up in local restaurants, galleries and businesses in the Harrisburg area. This time, however, the object is much smaller than a bovine and less stationary (though, please don’t take these with you!).

Friends of Midtown headed this new citywide arts venture, appropriately named, “62 Artists Do Lunch,” wherein 62 lunchboxes have been decorated and will be displayed throughout the city in Feburary and March (some are already up).

A gallery show will be held at the Tracey Mansion, in conjunction with the Susquehanna Arts Museum, Friday, Mar. 31 through Sunday, Apr. 2. Here, the lunchboxes will be offered for sale, in an effort to raise $10,000 for Midtown’s Salvation Army Kitchen and Loaves of Love.

I am one of the “artists,” though I’m not sure yet where my lunchbox will be on display. For my piece, tentatively named “Lunchlife,” I used mixed media – literally scraps and tokens, ticketstubs and the like that I’ve saved over the last three years to cover the box, making it a representation of not only my column and downtown Harrisburg, but pieces of the entire area nightlife and my other travels. Here are a few unprofessional images. I’ll update when I know where mine will be on display. The official press release from Friends of Midtown is below. A post on how to get involved will follow.

What’s smaller than a cow?
Still painted by an artist? Will provide over 150 meals in a soup kitchen? And makes a nifty purse?

Mayor Stephen R. Reed and City Councilwoman Gloria Martin-Roberts have agreed to serve as honorary co-chairs of the City’s newest public art project “62 Area Artists Do Lunch.”  Sponsored by Friends of Midtown, the project has artists creating art objects from silver aluminum lunch boxes like those carried by generations of school students.

Friends of Midtown president Dave Robertson says, “It’s like the cow parade, only smaller and with handles.  After our initial foray with artists for Gallery Walk ’05, where we put 19 plein air artists on the streets painting midtown, and then produced a very successful gallery show in a space we called ‘Rent This Gallery,’ we wanted a project that would continue to draw attention to artists and to midtown, as an artist friendly neighborhood.”

The 62 lunch boxes will be displayed at businesses, restaurants, and galleries in downtown and midtown during the months of February and March, with pictures and locations listed on the FOM www.friendsofmidtown.org website.  Interested businesses and restaurants can contact FOM to secure a lunchbox for display.  Then a gallery show will be held in April 2006 in the Tracey Mansion, 1829 North Front Street, in cooperation with Susquehanna Real Estate, a York based real estate development company who plans to restore the mansion for commercial use with a restaurant facility on the first floor and residential condominiums on the site. The gallery show will take place in the Tracey Mansion on Fri., March 31 and Sat. & Sun., April 1 & 2, where the lunch boxes will be for sale.  Any unsold lunch boxes will be auctioned off on Sun. evening.

Friends of Midtown hopes to raise $10,000 to be divided between two fine Midtown programs: Midtown’s Salvation Army Kitchen and “Loaves of Love,” the Harris Street Church’s food ministry for people living with HIV/AIDS.

“As a child, I can remember my mother telling me about how the Salvation Army helped us when we relocated to Harrisburg,” says Councilwoman Martin-Roberts, “She was separated and moved here with six children, the holidays were approaching, and she had little money.  The Salvation Army never put her through hoops or even doubted that she needed their help. I am delighted to learn that The Salvation Army, located in Midtown, will be one of the benefactors receiving dollars raised from this innovative project, ‘62 Artists Do Lunch.’”

Lunch boxes range from the beautiful like Carrie Wissler Thomas’ “Klimptian Ladies,” to whimsical “Jack Kerouac’s lunchbox found in the back seat of Lawrence Ferlinghetti’s car,” by Mimi Shapiro, to the truly monumental like graphic designer Lorna Carlson’s “Lunch Lady Bravura,” a four foot high piece that enters the realm of sculpture.

According to Mayor Reed, “Harrisburg residents should recognize many of the artists participating.  A large number of them contributed their talents and creativity to the Whitaker Center’s very successful Cow Parade, and while many of the artists are regional favorites like Earl Blust and Pat Koscienski, the recent HGTV star Robert Stadnycki is also  included.  Former Susquehanna University art instructor Florence Putterman, who is represented in collections at the Metropolitan Museum of Art, NY and the Philadelphia Museum of Art, has also contributed a lunch box.”

Dave Robertson adds, “Friends of Midtown is particularly proud to be working with a very diverse group of artists representing various ages, races, lifestyles, and including people with disabilities.  To see such a display of unity and creativity — supporting the Salvation Army’s and Harris St. Church’s two excellent meals outreach programs in Midtown — is a truly wonderful thing.”

Friends of Midtown has received $500 in funding from the Harrisburg City Council through Councilwoman Gloria Martin-Roberts to purchase the blank lunchboxes for the “Do Lunch” project. “Love for our fellow-man is a condition which must exist for a community to prosper and maintain a quality of life. My hat is off to Friends of Midtown for “loving thy neighbor.”