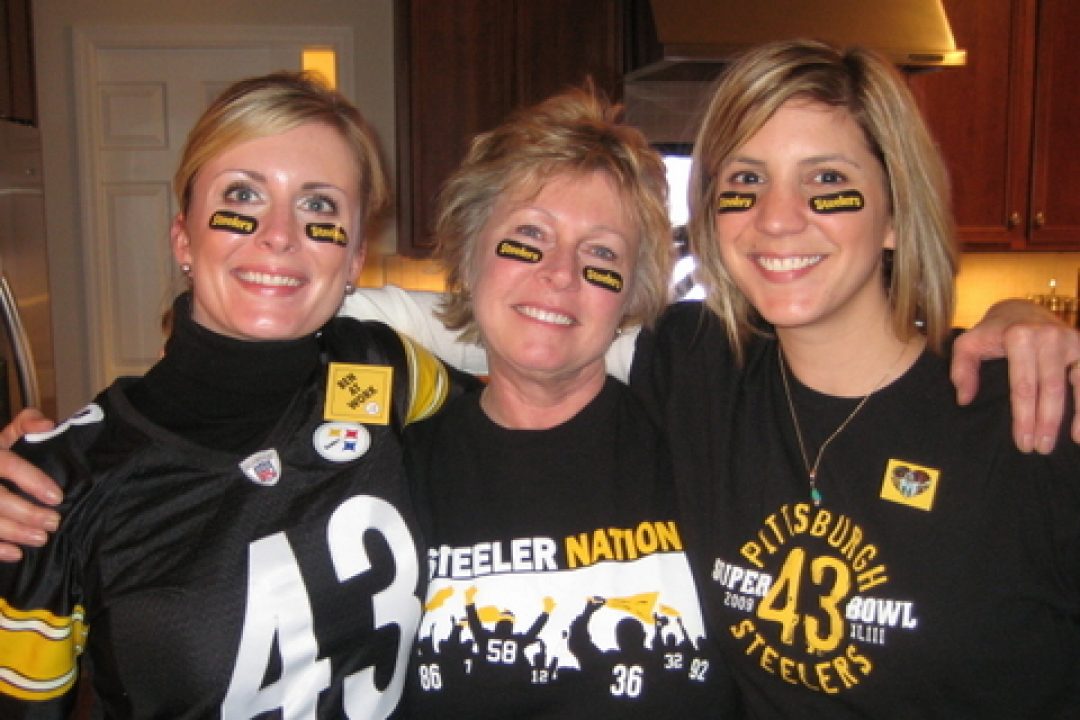 I got a great response to my plea in last week’s column for central Pa-located Steelers fans to share their plans for Super Bowl XL. Some of the emails will appear in this Thursday’s column; all copies are below, including a hand-written letter I just received today.

Sara –
I love reading your columns and wanted to respond to your request for Super Bowl plans. I am also a born Steelers fan. My parents are both from northwestern PA, which is why we are fans.  My interest has perked in the last year or so since Big Ben started playing and my husband and I bought a big screen TV.

Just like you and your family, we will also be sitting in front of our TV with my parents rooting on our beloved Steelers. We only brave the smoky,noisy bars when the networks don’t broadcast the Steelers. We will all be in our Steelers gear – t-shirts, sweatshirts and hats. My husband is the exception, he is a Bears fan, but roots for the Steelers due the peer pressure. For the Super Bowl, my parents may even take their Terrible Towel off the wall, where it is displayed, and use it to cheer on the Steelers. Their towel is an original from the 70s. Hope this helps!

My hubby and I will be on our first cruise and I will be watching the Steelers win the Super Bowl aboard the Norwegian Dawn. I am sure they will have some kind of Super Bowl Party. I just bought a new
Steelers tee shirt for this special occasion! I have forwarded Steeler Nation to you.

We thought the best place to celebrate the Super Bowl, other than Detroit, is in the Burgh with A LOT OF STEELER FANS !!!!! So we plan to party at the Sports Rock, waving our TERRIBLE TOWELS !!!!!
~~~~~Vickie~~~~~

As a transplanted Pittsburgher to Central PA I have had a 59 year love affair with the Black and Gold. Through good times and bad the Steelers have been my team. We raised three sons here who somehow
have shared that passion. During Super Sunday we will gather at Dan’s house to watch the game wearing our various shirts, waving terrible towels, eating sausage and drinking Iron City.
Win or lose we will enjoy the moment which may not come again for awhile. No matter what the outcome the Steelers will remain our team.

Sara,
Once upon a time,  there was a young boy who lived in Indiana, a small college town in western Pennsylvania, near Pittsburgh, in the late 60’s and 70’s. There was not a lot to get excited about in that small college town, until a losing team, that we always supported, started to be winners.
The Pittsburgh Steelers changed the ho hum world we knew late one afternoon when there was an “immaculate reception”.

No this wasn’t a great party following a wedding. It was the beginning of a dynasty, consisting of “BLACK and GOLD” that began to climb the mountain of GREATNESS.
In the 70’s, we all were glued to each and every play in the privacy of some college bud’s apartment so we never missed a play. The Beer cooler was in the middle of the room so the STEELER SPIRIT was always within reach, and therefore, our support for our beloved STEELERS was never compromised. It was a high pitched frenzy each and every game. FOUR SUPERBOWLS!!!!!!
It doesn’t get any better than that, or does it?

YES!!!!!!!! WE”RE BACK in BLACK and GOLD. These Steelers have goals and purpose and an amazing following. The only way to watch this team is on the edge of your couch, at home, not missing a play, and of course the beer is not far away, no distractions, just HARD CORE STEELER FOOTBALL!!!!!

It is great to know that YOU, SARA BOZICH, are a HARD CORE STEELER FAN!! I always knew you had it “going on”.  Now I know that you’ve got it together. STEELER FANS ROCK !!!!!!! Have a
wonderful time with your family on game day. GO STEELERS !!!!!!!! Love ya! Eustace

Hello, Read your column. How true. Central Pa. has NO team.
They ought to think about the Steelers being their team.
We love them lose or win–makes no difference. Love is Love.
I am age 80 from Pgh.(McKeesport to be exact) 15 miles out.
I will be married 50 years come June 17, 2006.
My husband is a republican, I am a democrat.
But we are both Steeler Fans.
That’s where we really blend.
Check out my front door. It is all black and gold. Our cloths are all black and gold.
WE watch all games in two diff. rooms. That way you have no interference about what is going on.
We will going to a private party (4 people) have some gormet spare ribs (main course)and all the trimmings.
Yes, we will all watch the super bowl together and cheer our team on. It is really exciting- we waited forever for this day.
How sad for central pa.–maybe someone ought to see that they get their act together and pick our team.
I feel bad that I’m not in the burg for these few weeks. To hear all the fight songs and all. The whole of Pgh. is one big black and gold city & surrounding towns.
As you can see I’m not really a writer -just put down what is in my heart. Go Steelers.

Hi Sara. My name is Bill Holste, but local Stiller Fans know me as Franco. Over the years I have been an Officer, regular member and/or motional director of the two local Steeler Fan Clubs. Harrisburgh and York.
My wife and I, along with 4 kids, 3 grand children Inn-laws out-laws and many, many other Stiller fans will be at our home from 2:PM to 4:PM for an Open house, pre-game picnic/party. The first few days of this week I will be setting up all of my Stiller Stuff along with my momentos from Super Bowl XIII
that I attended 27 years ago.
Shortly after 4:PM we will all be going to Legends at the Holiday Inn on the Carlisle Pike for a Grand party to watch the game. You are sure welcome to stop over at either place or both for a Iron or a Rock and some munches.

Dear Sara,
My 40” tv died after 20 yrs so I bought a Samsung 50” DLP-HD, so I will be at home watching the game.  I’m an Eagle fan but I also root for the Steelers since they moved to the AFL. In your article you mentioned that Harrisburg does not have a professional football team which is true. However, they do have a semi pro team, the Piranha, who are the National Champions for 2005 in the NAFL
league. They beat the Washington King County Jaguars, 28-3 at the Disney Wide World of Sports Complex in Orlando, Fla. They also won the championship in 2002 and played for the championship in 2004. They play at the Skyline Sports Complex on City Island where their home record is 104 wins – 0 losses. It sounds like I am the owner but I’m just a fan. They are the best kept secret in the area. Since I e-mailed Jerry Reigle, he has given the Piranha excellent coverage. The schedule starts in June. Take Mom and Dad to a game and you will be hooked.
Tom Trautman

This year, as a Pittsburgh Steelers fan and season ticket holder, was different for us. The last couple of years we been at the playoff games in Pittsburgh tailgating, so being “home” was a change for us. But withstanding, being “home” or “away” does not matter as long as they keep winning! I’ve even
found my “One for the Thumb” hat from the 80’s that my parents got me. I was born and raised in Greensburg, PA, just 30 miles east of Pittsburgh.
Francis L. DeNaro

Sara,
I’m having more folks over – more couples, more seating.
I’m putting a bigger TV in the bathroom! Six TVs total. The TV audio will play through the sound system to the living room, kitchen and bedroom. Also – recording the game on my hard drive for replays of controversial calls.

Good column last week Sara. I read it at HIA on my way to Santa Barbara for a work conference. I know, I know. Life is rough.

Anyway, I just wanted to shoot you a quick e-mail and say “Go Steelers!” I had something black-and-gold on every day that I was in Cali. The folks who were there from Denver hated it.

I’m also wearing black-and-gold every day this week at work and will most definitely be watching the game Sunday … just not sure where yet.

We’re from Pgh. so our kids were weened on the Steelers.
During the fabulous 70’s and four Super Bowls we’d spread a big blanket on the living room floor and eat Kentucky Fried Chicken. The only four times we were allowed to watch T.V. and eat at the same time.

To carry on the tradition, we’ll be with my daughter and her family in Camp Hill, Bob and Jackie Kelly.
And, you guessed it, we’ll be sitting on the floor eating K.F.C. Go Steelers!
Mrs. Jeanne C. Kent