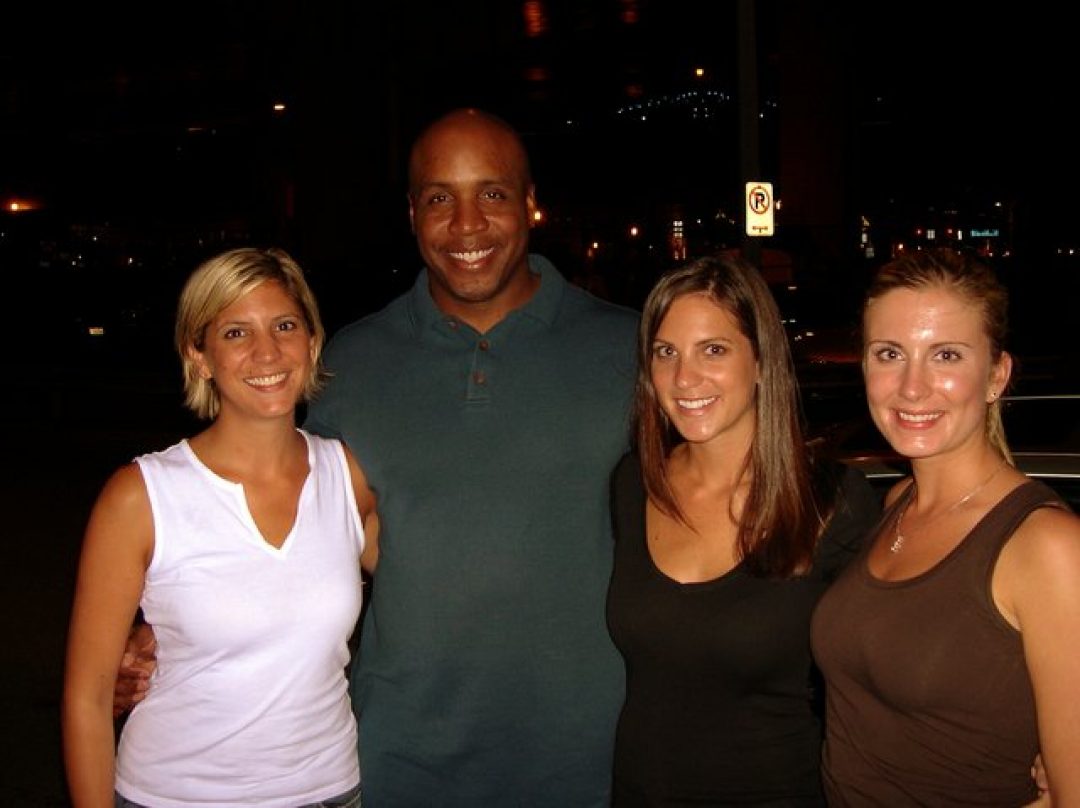 The Day of Bonds

Did you hang out with Barry Bonds today? Because we did.

The day began simply enough. After everyone awoke and wrote or read blogs or made up songs in the bathroom, the girls (Rachel, Keri and I) went for lunch at The Fish Market, the reknown sushi restaurant inside the Westin.

Mike, Rachel’s husband, was ready for the day and rode the elevator down with us. Bob and Dan had earlier chosen to “work out,” and the ‘Zo was bored. He waited, instead, in the lobby for the boys. Dan made it down first, and while the two were talking, they noticed someone behind them talking on a cell phone. It was Barry Bonds.

In our initial planning stages for this trip, we joked about coming to Pittsburgh specifically this weekend to “Boo Bonds.” (Coincidentally, at the game we actually saw guys wearing a shirt with this same mantra.)

Mike came in to the restaurant to share the news, giddy like a little boy who just met his hero. By matter of circumstance, ‘Zo ended up having coffee with him, another friend and others in the early afternoon.

Keri said, “Why does he look familiar?” about one in particular.

Rachel and I answered almost simultaneously, “Because it’s Barry Bonds.”

We wanted a photo, but we wanted to be cool. Instead, we opted for acting like morons and staring slackjawed at the baseball legend.

“Three beautiful ladies,” Bonds said as he breezed past us. “I better keep walking before I get myself in trouble.”

After we recovered from our star-struckness, we hopped on our cell phones to share our news.

We rode this high through Saks, which is probably why we dropped a few dollars on makeup and shoes (I got the shoes, but I swear, they are completely practical).

After shopping had nearly exhausted us – Rachel and I were jonesing for hot dogs, naturally – we contacted the boys who were at this point on an alleged North Side (pronounced “NorSide”) bar tour.

They were at The Clark Bar & Grill, and sent a friend to retrieve us since my sister insists on wearing 3″ heels to everything (and, thank god she did, because on our drive back it was much more clear how far away from the hotel this place was).

We hung out here for a couple hours sipping Iron City Lights prior to gametime, then slid into our fantastic seats behind home plate at PNC Park. The game was good – especially since the Pirates won (a rarity these days), and we girls, I know, had a newfound like for Bonds and decidedly did not boo him. In fact, the reaction from the crowd at PNC was mixed between boos and applause. While there were Giants fans present at the game, they did not account for all of the positive reactions.

Bonds struck out twice, and after the Bucs win, we returned, as promised, to The Clark Bar.

Later, Bonds arrived; he’s a friend of the owner.

We were already seated at the table, and this time, we insisted on acting cool. Bonds and his other two companions recognized us from the hotel earlier, and Bonds kidded with my sister about her childhood devotion to RJ Reynolds.

But the crowd in the bar noticed him, and many people came back towards our table to try to take photos, sneak camera phone shots and request autographs. Seeing this from the other side gave us a new appreciation for the hardships of celebrity. The guy can’t go out and just have a drink with a friend without hordes of people bombarding him.

He and his bodyguard refused many people photographs, but we were lucky enough – and he was kind enough – to grant us one, just the girls, outside, on his way out. Bonds hadn’t stayed long and was on his way to wherever sports celebrities go on a Saturday night after losing in your former home city.

When we returned to the hotel before 2 a.m., a small crowd of people – mostly teenage boys and few men in Giants t-shirts – had gathered, seemingly waiting for Bonds to return from his excursion.

We – having had our “day of Bonds” – knew better and carried our Pirates bobbleheads upstairs to bed.

It was a good day, a fun day – and not one to soon be forgotten.

Quick recap:
Coffee with Bonds
Complimented by Bonds
Watched Bonds get struck out twice
Hanging out with Bonds
Photo with Bonds