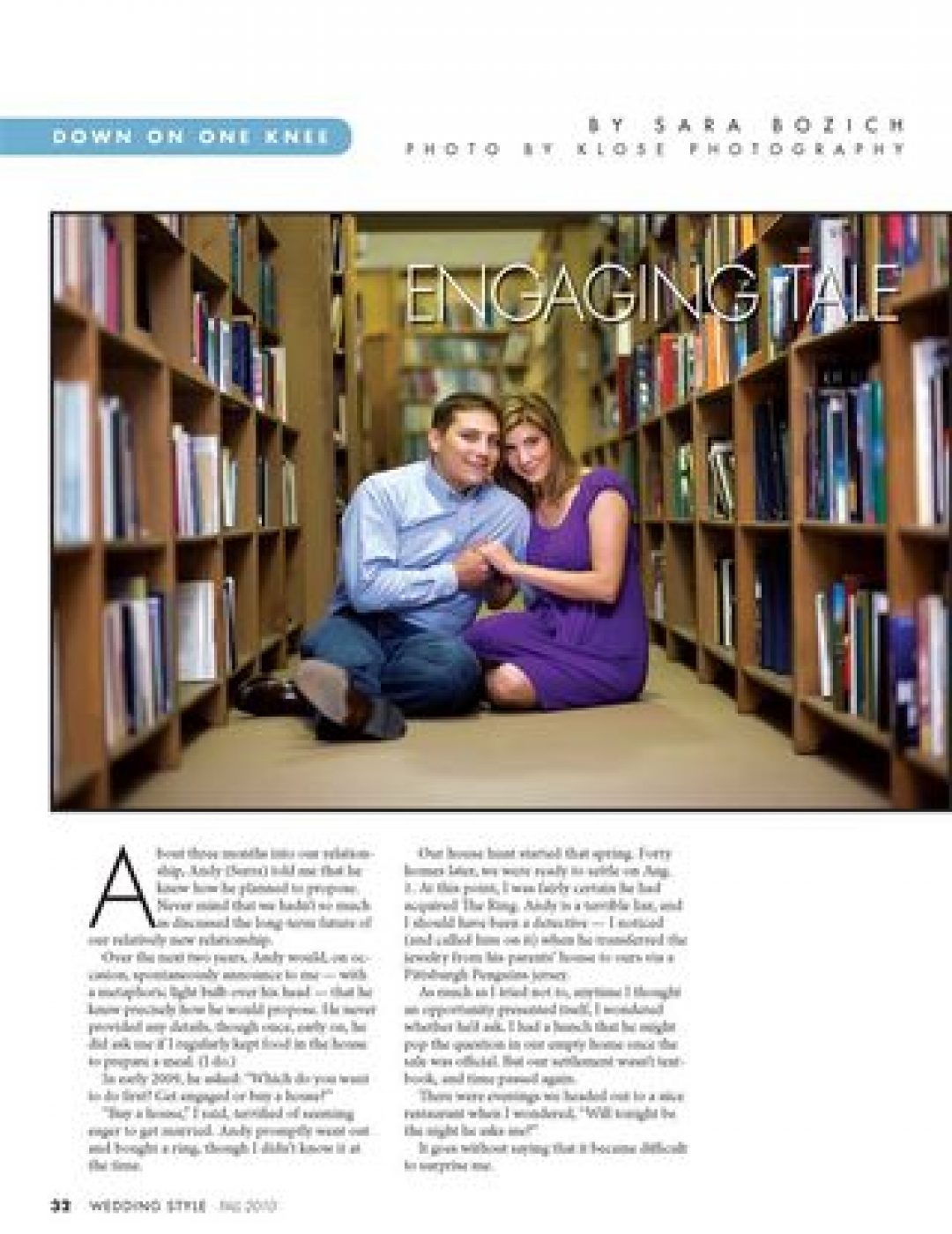 As promised, and as seen in yesterday's Wedding Style Fall 2010 in The Patriot-News, here is our engagement story (or click on the photo to link to the online version):

About three months into our relationship, Andy (Surra) told me that he knew how he planned to propose. Never mind that we hadn't so much as discussed the long-term future of our relatively new relationship.

Over the next two years, Andy would, on occasion, spontaneously announce to me – with a metaphoric light bulb over his head – that he knew precisely how he would propose. He never provided any details, though once, early on, he did ask me if 1 regularly kept food in the house to prepare a meal. (I do.)

"Buy a house," I said, terrified of seeming eager to get married. Andy promptly went out and bought a ring, though I didn't know it at the time.

Our house hunt started that spring. Forty homes later, we were ready to settle on Aug. 1. At this point, I was fairly certain he had acquired The Ring. Andy is a terrible liar, and I should have been a detective – I noticed (and called him on it) when he transferred the jewelry from his parents' house to ours via a Pittsburgh Penguins jersey.

As much as I tried not to, anytime I thought an opportunity presented itself, I wondered whether he'd ask. I had a hunch that he might pop the question in our empty home once the sale was official. But our settlement wasn't textbook, and time passed again.

There were evenings we headed out to a nice restaurant when I wondered, "Will tonight be the night he asks me?"

It goes without saying that it became difficult to surprise me.

Andy told me later that there were many mornings he woke up and thought, "Today is the day," but then something would happen. I'd nag him about leaving dirty socks in the living room, or we'd get into a spat about something else silly – and he'd put it off.

One September evening, one of my good friends was over after work. We stood in the kitchen and snacked on pickled string beans, brie and raspberries, washing it down with giggles and Pinot Grigio. Around 8 p.m., she left to go home, and I hunkered down to tend to laundry and catch the season premieres of our favorite Monday night television shows.

Surrounded by piles of laundry, Andy came over to lay with me during a commercial break. He got up, and I waited for him with the Tivo paused on the opening scene of a new sitcom. (He told me later that I had smelled so wonderful, even after a full day's work – and wine – that it pushed him to finally decide to do it right then. No more waiting.)

Suddenly, he appeared in front of me, on one knee, telling me lovely, kind things that are now all a blur.

Stunned, I identified the jewelry box and made a mental note to be sure I answered any questions correctly. (Andy had once or twice gotten down on one knee, told me he loved me and asked me to make him a grilled cheese sandwich. He also told me he would only ever ask the real question once.)

I was afraid he wasn't getting the proposal he wanted, both of us in sweatpants, with more television in our queue for the evening. No fancy dinner, no props, no rehearsed plan.

Despite his early brainstorming, Andy realized that a more intimate proposal was better suited for me and for us.

We didn't even call our parents that night (turns out I didn't have to – ever traditional, Andy had expressed his intentions to both of my parents long beforehand).

Though the proposal veered from Andy's original intent, it was a more meaningful moment between only us, in our new home. The perfect way to start our lives together.

Sara Bozich is a nightlife writer for The Patriot-News. She also blogs about food, drink, events, giveaways and wedding planning on her blog, SaraBozich.com. You can follow her on Twitter @SaraBozich.

Don't miss my other wedding-related posts: