The following is a part of a guest series authored by Lauren Gutshall on discovering new wines and beers.

Tomorrow is Memorial Day, a day when we honor those who died serving the country. It’s also the weekend when we traditionally kick off summer. We gather with friends around a picnic table, fire up the grill to make hamburgers and hot dogs, eat potato and macaroni salad, slice a watermelon and top it all off with cupcakes adorned with red, white and blue icing.

And the beer and wine are free flowing. Bottles and cans are shoved into coolers full of ice and come out so cold that they drip with sweaty condensation. Around here the cooler full of drinks inevitably contains some ice-cold Yuengling Lager mixed into the regular assortment of beer.

Lager is one of the two main umbrella styles (the other is ale) that encompass a range of specific types of beer, namely pilsners, bocks and marzens. It is fermented at a colder temperature than ale, with the yeast on the bottom. The term lager comes from the fact that the beer is often stored, or “lagered,” for several months before being ready to be consumed. (Aside: if you’re interested in exploring the nuanced differences between lagers and ales, read this detailed article from Popsci). 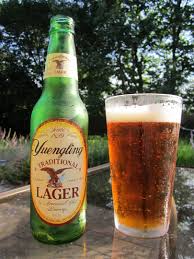 Yuengling Lager has become the staple of our Memorial Day drinks for a reason. It’s a crowd-pleasing beer with a pale amber color and hints of caramel and malt. It isn’t hoppy or bitter and it has a low ABV so you’re not getting drunk in the hot sun. And it’s so popular around here, you can’t go anywhere without seeing it.

When thinking about the typical summer kick-off picnic, I pondered the wine most likely to be seen shoved into the cooler next to the lager. Sometimes you find pinot grigio or that adult grape juice, concord. Sometimes it’s a fruity bottle of Arbor Mist. But most of the time, I’d venture to guess you find that rosy pink white zinfandel.

White zin is seen as the perfect picnic wine for so many reasons, not the least of which is that it’s pretty inexpensive. It ranges from semi-dry to sweet, and is served chilled so it’s a refreshing drink on a warm day. Sutter Home created and produced the first white zin. The winemaker originally made it from the leftover juice that was pressed off when concentrating zinfandel to make a dry red wine. The white zinfandel became a huge hit, and today it outsells red zinfandel almost 6:1. It’s so popular that wineries in California tend to plant some grapes specifically for zinfandel and other, often inferior, grapes to be used to produce the lighter, sweeter white zin.

Many wine connoisseurs claim that white zin is meant for those people who don’t like wine, but as a picnic wine it certainly has its place. It’s the wine meant for hot dogs and potato chips. Besides, what other wine can you drink out of a plastic cup?

Lager and white zin may not be comparable in terms of taste or aroma, but they both epitomize the easy-drinking picnic beverage. So this weekend, set up the volleyball net, get the horseshoe pits ready, slather on the sunscreen and chill those green bottles of lager and that bright pink white zin. Taste the beginning of summer.

Other local lagers to try:

There are plenty of White zins out there, but you could also try other blush wines: