Let me paint a picture for you.

It’s a fall Sunday around 1 p.m., and you’re about to settle in for a full day of football starting with your beloved Steelers taking on the Brownies.

You flip to CBS, and BAM, that team from Baltimore is on. Yes, it’s one of those inconvenient (and infuriating) days where the Steelers get passed over in favor of the Ravens.

If you’re a Steelers fan who has been living in the area for a while, this is a situation that’s all too familiar. If you’re new to the area, welcome to football hell.

While it seems like we might luck out and only miss four games at most this season, it’s still a pain, and you’ll need a way to watch the Black and Gold.

If you need to check if the game will be on TV, we like to use 506 Sports. They usually update the map by the Wednesday before the game, so you have ample time to plan.

Obviously, if you have the Sunday Ticket, you’re covered. For those of you who don’t, we feel your pain, and that’s why we’re coming to you with this list.

The owners of Big Bottom are from Pittsburgh, so you know they’ll have the game queued up. Plus, they have essential gameday snacks like this Buffalo Chicken Dip, and of course, plenty of pizza, bolis, and beer.

While you’re there, be sure to ask what Big Bottom beers are on tap. We really dig the B3 IPA, it’s a perfect pairing with the Buff-Chick Dip.

Local Steelers fans should be very familiar with the friendly Black and Gold confines of Speak. It’s a go-to location when you need to find the game.

Speak offers more than just access to the game. They always have one of the best draft lists in the area, and their food, especially if you can catch brunch, is always on point.

The Midtown used to be a notorious Steelers hot-spot. Now, they don’t skew as far Black and Gold as they once did, but you’ll be sure to find a post-up spot for the game in a comfortable atmosphere.

The Midtown, like Speak, always has an ever-rotating lineup of local, regional, and national craft beer selections, and a 40 cent wing special makes it even more inviting.

For those of you who live closer to Hershey, this should be your Steelers oasis. The Wharf is a neighborhood bar that bleeds Black and Gold. For food, you can get everything from club sandwiches to mini-bolis.

Their craft beer selection isn’t top-notch, but if you’re in the mood for a beer, you’ll be able to score something you like. I would instead suggest maybe a classic mixed drink or fun cocktail from their signature cocktails list.

It’s home of the Harrisburg Steelers Fan Club so you’re guaranteed to be among friends, and you won’t have to ask the bartender to switch the channel. Couple that with cheap drinks, and you have a match made in Steelers heaven.

Entry is $5 a game, or $15 for the season, but that seems worth it to ensure you have a spot to watch the Steelers on Sunday.

West Shore Steelers fans have a home in the Caddy Shack on blackout Sundays. If you’re in the west shore burbs, this has to be your home away from home.

With wing and beer specials during every Steelers game, you can’t go wrong with throwing on the Big Ben jersey and rolling up for a game.

The SaraBozich.com has our own spot we like to frequent, but we’re going to keep that and their hot garlic wings a secret for right now.

There are a few local places where you can catch the game, but they aren’t “Steelers bars.” You might have to crane your neck to see the TV and most likely watch without sound. 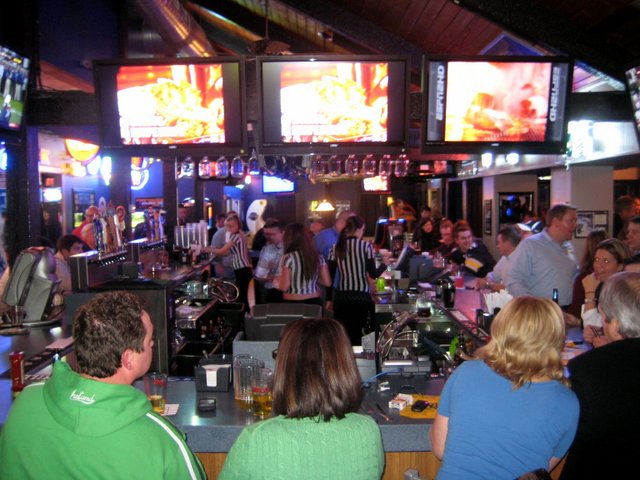 You know it. Arooga’s is the spot you go to when you want to make sure you get eyes on a game. A bonus with Arooga’s is that while you have one eye on The Killer Bs, you can have the other on your fantasy players playing on one of the 100 other TVs.

This bar used to be a go-to for me and not just for Steelers games. Underdog has a wide variety of wing sauces (Hot Ranch was a Jimi staple) in addition to a full menu of burgers, pizza, salads, and sandwiches.

Like Arooga’s, they have TVs all around the restaurant, showing every game throughout the NFL. If you’re looking for beer, their craft beer bucket is the answer. You get to pick three bottles from their solid selection for only $12. One time, I was able to snag a bucket of Dogfish 90 Minute, Ballast Point Grapefruit Sculpin, and Perpetual.

Dave & Busters is a sports and gamers haven.

The new Dave & Buster’s offers walls of TVs including two huge projector screens for a perfect view of the game no matter where you sit in the bar area.

You can grab a variety of craft beer drafts, or since it’s Sunday and you might need it, their Bloody Mary could be the perfect “hair of the dog” cure.

If you need to relieve some stress during the game, you can always venture off into the maze of arcade games.

Playing a game or two could also help make halftime pass by a little faster.

Did we miss any Steelers bars that we NEED to include on here?